The Ocean Mapping Group’s role from 2003 to 2013 was to test the CCGS Amundsen‘s acoustic equipment and collect as much depth, backscatter and sub-bottom data as possible throughout the Canadian Arctic. The primary purpose being to build up coverage with each transit through the passage. Data collected from the lengthy transits and planned surveys will allow scientists, hydrographers and the general community to better understand the Arctic seabed morphology and improve navigational safety.  Each year, collected data is processed and made available on-line to all interested parties, whether involved with the ArcticNet project or not, in numerous formats.

In 2012 and 2013 a similar initiative was started on the RV Nuliajuk to map the seafloor throughout Southeast Baffin Island. The primary purpose again being to build up coverage with each transit, improve navigation corridors to the Northern communities, study sea level history, geohazards, and marine habitat mapping. 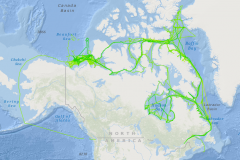