CSL Heron is a state-of-the-art 34ft hydrographic/geophysical/oceanographic survey launch. The Heron is owned by the Canadian Hydrographic Service (CHS) and is currently on loan to the Ocean Mapping Group at the University of New Brunswick (UNB). The loan is part of a Joint Partnering Agreement between the CHS and UNB. Heron is provided for the purposes of conducting Ocean Mapping related research and training.

Originally built in 1983, the Heron was professionally rebuilt and outfitted to modern standards over the winter of 2001-2002  at the Bedford Institute of Oceanography. She is equipped with a unique suite of acoustic survey instruments funded through the Canadian Foundation of Innovation, Kongsberg Simrad and ACOA. She has been used in support of a series of collaborative research projects along the Fundy Coast of New Brunswick, in the Canadian Arctic aboard the CCGS Amundsen as part of the Arctic Net program, and on the West Coast of Canada. 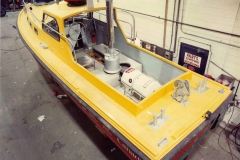 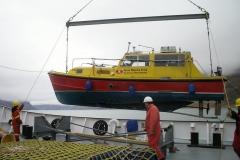 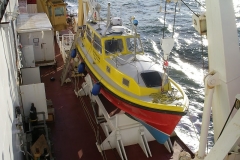 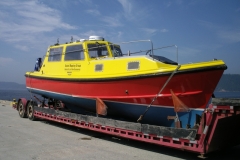 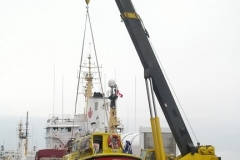 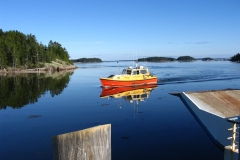 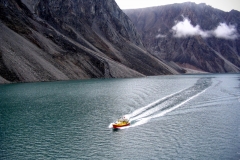 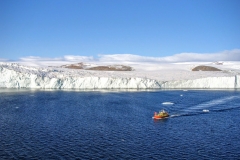 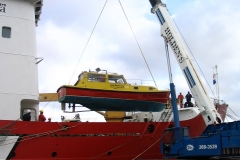 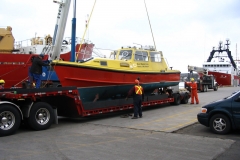 CSL Heron was built in 1983 by C&C Boatyard in Ontario based on a Nelson hull. She was was one of the first two boats (Heron and Hagdon) of the H Class, that became the mainstay of CHS single-beam launch operations in the 1980’s. The original 2 boats looked significantly different at first, with a large open cockpit and a Z-drive. Based on early trials, the current superstructure configuration was decided upon and these hulls were modified to have the current larger cabin and direct-drive shaft..

All subsequent H-Boats (a second batch were delivered in ~ 1988) were of this configuration. The Heron and Hagdon were unique in that they had Caterpillar rather than Volvo propulsion and that they had a single-support skeg mounted rudder rather than the V-skeg of the later builds. The V skegs (adopted also on the newer P-boats), are more resistant to grounding (as they are not coupled to the prop-shaft) but are far worse for maneouvering.

The Heron operated as single beam survey launch atttached to CSS Baffin (100m Arctic survey vessel) for operations in the Arctic and on the Grand Banks during the 1980’s. In 1989, CSS Baffin was retired and Heron was put in storage. In 1994 her engine was rebuilt for use as a demonstration boat for the  multibeam courses in St. Andrew’s in 1994/5/6. After that she was mothballed for a further 5 years, before being remobilised for this project in the fall of  2001.

Over the winter of 2005/2006 the Heron was stripped down to fibreglass and completely rebuilt at Grand Manan Boats Ltd. in Grand Manan. There was a complete replacement of all electronics (24V and 120V) aboard. A new engine and generator were purchased and installed. New AC and DC wiring was run. Hull damage was repaired. The sound proofing, headliner, and desk were replaced. A 6 ft shock mounted server rack was installed. The navigation system was upgraded to a Furuno Nav Station vx2 black box unit with sounder, WAAS enabled GPS, digital radar, and heading sensor.

CSL Heron was professionally rebuilt and custom-outfitted by the uniquely skilled personnel at BIO including:

and a number of others….

The original idea to reincarnate one of the H-boats was the beery eyed result of brainstorming by:

She was revived again over the winter of 2005/2006 following a mishap in Quebec City that saw her at the bottom of the Saint Lawrence for 3 days. Thanks go to:

CSL Heron’s main base for operations is out of the Institute of Ocean Sciences (IOS) located at:
9860 West Saanich Road,  Sidney, British Columbia, V8L 4B2, Canada.

Heron underwent extensive refit at the Saint John Marina over the 2002-2003 winter, including minor hull repairs. full repaint and having the 3.5 kHz transducer being fitted as a flush hull mounting. She operated from April to November.

Further internal storage chamber and repair work went on over the 2003-2004 winter. Heron was launched in April and is schedule for recovery in November

Multibeam system upgraded to EM3002-S in July. Upgrade of PCs in preparation for Arctic work. Heron was launched in April and ended her season abruptly in Quebec City on July 29.