UNB’s premier research vessel, the CLS Heron, made a successful trip to the Canadian Arctic this year hitching a ride on the side of the CCGS Amundsen, Canada’s 100 metre research icebreaker. The Amundsen left port in Quebec City on August 22nd, 2006 and will return on November 10th, 2006. The trip is divided into two six week legs. Steve Brucker, Ian Church, Jonathan Beaudoin (last four weeks of leg) and John Hughes Clarke (first two weeks of leg) manned the first leg of a journey though the Northwest Passage ending in Kugluktuk, Nunavut. Jason Bartlett, Doug Cartwright and Pim Kuus are currently enjoying the second leg which started in Kugluktuk, went into the Beaufort Sea and they are now returning through the Northwest Passage.

After sitting idly by for 12 days, it was the Heron’s turn to shine for the Oliver Sound survey. Oliver Sound in located in Sirmilik National Park on the northern tip of Baffin Island. The purpose of the Oliver Sound survey was to map the deep sections of the uncharted fjord with the Amundsen and to map the glacier fronts and shallow waters with the Heron. To keep things exciting, the Heron was launched for the first time in the middle of the night. Over approximately 24 hours, Oliver Sound and one side fjord were mapped. 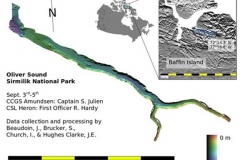 The next stop for the Heron was the scenic Belcher Glacier on Devon Island. For this survey, the Heron’s job was to map the glacier front while the Amundsen mapped the uncharted waters in the inlet. Over 12 hours the majority of the front of Belcher Glacier was mapped with the Heron, while the surrounding waters were mapped by the Amundsen. 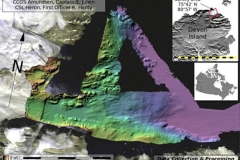 The third stop for the Heron was Resolute Bay, Nunavut. Over the 12 hours allocated for this survey, the Heron mapped the near shore waters of Resolute while the Amundsen sat at anchor for a community visit. 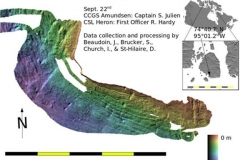 The fourth and final Heron survey for leg 1 was in Coronation Gulf. The Heron and the Amundsen both contributed to mapping along a potential new shipping route in the southern section of Coronation Gulf. The Heron spent its time in the shallow waters along a line of outcropping bedrock escarpments while the Amundsen mapped the deep basins along the potential shipping route.

Leg two proceeded to perform a number of Heron surveys in the Beaufort Sea region.

An oldie, but one of my favorites. #canadiancoastg

2019 field season is off to a great start

The Heron has finished another successful season m

Enjoying a lovely sunset after a productive week o