Thanks to everyone who came to the presentation!

Link to the book that Dr. Soomere discussed during his presentation: Preventive Methods for Coastal Protection 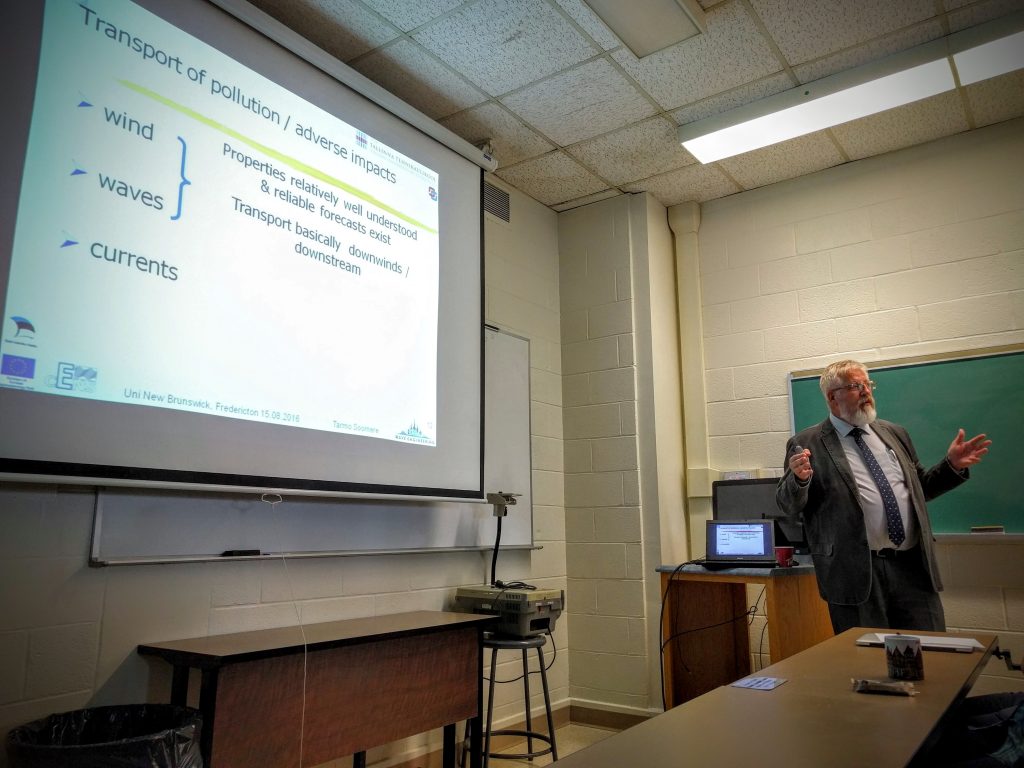 Smart use of currents for environmental management of maritime activities

The ever increasing human impact on vulnerable marine and coastal areas and especially the increase in risks associated with potential oil pollution, calls for novel methods for mitigating the impact of such risks. I present an overview of the prototype of a preventive method for environmental management of various potentially dangerous activities. The method relies on the quantification of the potential of different offshore domains in terms of their “ability” to serve as a source of current-driven danger (e.g. oil pollution) to the coastal environment.

A general solution to this problem requires solving an inverse problem of pollution propagation. An approximate solution is obtained by means of statistical analysis of a large number of solutions of the associated direct problem of propagation of single water parcels. The approach binds together a 3D ocean model, calculations of a large set of Lagrangian trajectories of water (or pollution) parcels, statistical analysis of the properties of these trajectories and, finally, a method for construction of the optimal fairway. The potential of its use is demonstrated in the context of the optimisation of ship routes in the Baltic Sea in terms of minimising the risk of coastal pollution.

Prof. Tarmo Soomere (Estonia) graduated in 1980 from Lomonossov Moscow State University as mathematician and received a PhD in oceanology from the Shirshov Institute of Oceanology, Moscow (1984), and the degree of Doctor of Mathematics (1992) from Tartu University, Estonia. He is currently the Head of the Wave Engineering Laboratory in the Institute of Cybernetics and the President of the Estonian Academy of Sciences. His scientific interests have been mostly concentrated in wave theory and modelling, with specific focus on various processes in the nearshore and coastal zone management.

In 2002 and 2013 he received the Estonian State Research Award in engineering sciences. He was declared the Person of the Year in Estonia 2005 by the daily newspaper The Postman for his contribution to the forecast of a devastating storm, received the Baltic Assembly Prize for science (2007), was elected to Estonian Academy of Sciences (2007) and to Academia Europaea (2009).

An oldie, but one of my favorites. #canadiancoastg

2019 field season is off to a great start

The Heron has finished another successful season m

Enjoying a lovely sunset after a productive week o